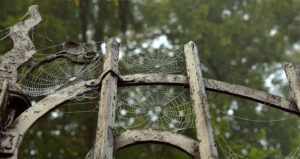 Nightmare House by Douglas Clegg is a haunted house tale published in 2012. I learned from Amazon’s website that this book is one in a series that revolves around the house. The books can be read out of sequence.

The names in Nightmare House are what most stood out to me. Let’s start with the house and estate named Harrow. From Google’s dictionary, a quick search yielded the definition of “harrow:”

an implement consisting of a heavy frame set with teeth or tines which is dragged over plowed land to break up clods, remove weeds, and cover seed.

“they ploughed and harrowed the heavy clay”

By name of the house alone, the reader can decide about the sturdy farming implications of the word…or they can notice the “cause distress to” nuances of a potentially harrowing tale ahead. Calling it Harrow was a stroke of genius on the author’s part.

Ethan Gravesend is the grandson the reader meets as he inherits Harrow. “Gravesend” = graves end. What a delightfully creepy surname! If one’s last name is Gravesend and one has inherited a property called Harrow, spooky shenanigans are bound to follow.

Police chief and supporting character Pocket is another powerful name choice. As a name, “Pocket” feels like tucked away secrets, events hidden carefully away and kept safe.

“He sacrificed his daughter’s happiness to it,” Pocket said to Ethan. Again, another brilliant word choice. “Sacrificed” as in gave up something of tremendous value, but also “sacrificed” as in giving a life to feed the evil.

Nightmare House is a satisfyingly haunted read, but my takeaway that I can apply in my own writing is the power of deliberate word choices. By careful selection of names, the author reinforced the tone of his haunted tale.

2 thoughts on “Notice the Names in Nightmare House”