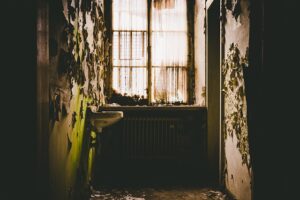 I am deliberately not researching the stories behind The Amityville Horror by Jay Anson. I am not going to research the DeFeo murders or the credibility of George and Kathy Lutz. I am sorely tempted to do some digging because the numerous financial concerns of George Lutz could certainly justify the creation of some elaborate haunted house story in order to skip town and maybe make some money off the tale.

The experiences of the Lutz family take place over 28 days before they evacuated their haunted house. By comparison, Ellen Mercado and her family from the book Grave’s End stayed in a haunted house for years before a cleansing stopped the chaos.

The family experienced flies, temperature anomalies, windows and doors opening on their own, green goo appearing out of nowhere, and even the sound of a marching band creating a ruckus. Daughter Missy apparently befriends a giant pig that talks to her, and her father even sees hoof prints outside the window.

As a reader, I’m left with questions after reading Anson’s book. Did the Lutz family experience all these extreme and unusual happenings because of the DeFeo murders? Were the DeFeo murders caused by similar strange happenings and the Lutz family just came in where the weirdness left off? Has the house and location always been haunted or was it only haunted because of the murders?

There was an envelope of cash that disappeared in the story. Do ghosts and ghoulies typically take large sums of money? Where did it go? Are we to think that the envelope evaporated into some other dimension or that it was hidden away somewhere on the property?

It’s mentioned in the book that when George and Kathy initially visit the home, the blinds of the neighboring houses are closed in the direction of this house. I didn’t think that was unusual. If I had known the DeFeo family and I had to continue living in my own home after the murders, I’d want to close the blinds, too. I think it’s natural to want to turn away from any memory of the horrors that happened on Ocean Avenue. Out of sight, out of mind.

One thing that stood out to me was how the Lutz family dog reacted to various areas of the house. That’s a takeaway for me: before I buy another house, I’ll walk my dogs around there first. I trust the reactions of ordinarily agreeable family pets. Fear or aggression towards the unseen is a huge warning flag to leave the area.

If the things that happened to the Lutz family are indeed true, they were brave to last there a month. I would like to think I would’ve picked up on the high weirdness before buying the property, but maybe I would’ve been distracted by the low price for a  huge home with a pool and a boathouse.

3 thoughts on “The Amityville Horror: Green Goo and Marching Bands”