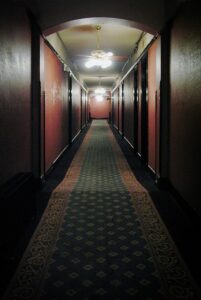 Phrases.com shows the definition of “twenty-five cent words” as “an uncommon word, often used in place of a more common one with the intent to appear sophisticated.” Something that stands out to me in my re-read of The Shining by Stephen King is the use of many fancy-shmancy words.

Perhaps ol’ Steve wanted this work to be considered a more literary read than horror. Perhaps the editor put those words in place of some better-known words that had been repeated. Either way, there are words in The Shining that I think I understand in context but don’t recognize easily. I’ll share some of the words that caused me pause.

Malefic. Color me a dork, but I gather from the name of the Disney villain Maleficent that this means something especially bad. A Google search tells me it means “causing or capable of causing harm or destruction, especially by supernatural means.”

Flambeaux. Flambe desserts are on fire when they arrive at the table, so maybe this is something on fire or lit. The “eaux” on the end helps me to know it is plural. Looking it up, the definition is “a large candlestick with several branches.”

Yaw. I know “maw” but I don’t think I know “yaw.” Similar maybe? The definition didn’t really help me: “a twisting or oscillation of a moving ship or aircraft around a vertical axis.” “Yaw” is used on page 584 of my copy in the description of an elevator’s entrance. I kind of think that really he meant “maw.” Will someone call Steve and ask if it’s a typo? Thanks.

Roque mallet. Maybe everyone else in the world knows what “roque” and “roque mallets” are, but I didn’t. If a roque mallet is going to be used as a weapon, I needed to know what it was and what it looked like to really embrace the scene in which it was used. “Roque” is apparently an American version of the game “croquet.” A roque mallet is wooden. I remember on my first read of this book, I assumed there was some metal involved in this implement, though I don’t recall why I thought that.

The biggest reason I’m calling out the twenty-five cent words is that they pull me out of the story. I, perhaps arrogantly, consider myself to be well read. It’s rare that I run across words in modern fiction that stop me.

The Shining was written, I assume, to entertain. When we write to entertain, I think we have an obligation to our readers not to dumb it down, but to make the writing approachable enough that we can create a mood that is understood.

Maybe it wasn’t written to entertain, and I need to suck it up that I didn’t know all the words. Perhaps it was intended to be a profound literary work, written in such a way as not to appeal to the masses.

Another day and time, we can get into why so many characters stutter in Stephen King’s books.