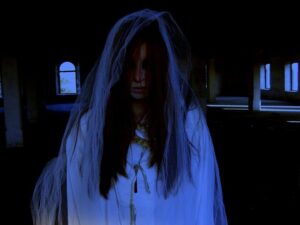 Hell House by Richard Matheson was intended to frighten the reader. Four people enter a haunted house in Maine to find proof that there is life after death. Their time in the house corrupts their behavior. Not all the investigators survive the investigation. Scary stuff, right?

Unfortunately, I fell out of the hypnotic trance of a good spooky book with scenes that are now laughable. When the two women are possessed by a spirit, they suddenly become nymphomaniacs, eager for sexual delights.

Edith attempts to engage in a naughty tryst in the sauna with her husband. He responds with horror, as the only way his wife would behave in such a saucy manner is if Edith were being manipulated by an evil spirit.

Really? The only way a woman might want to have sexy time in the sauna with her husband is if her freewill has been seized; clearly, that’s the only explanation. I had to stop reading to roll my eyes.

Overcome by wanton lust, Florence strips and straddles Edith, trying to get Edith to touch her bare breasts. Florence announces that they are both “that way.” Florence would only feel free to waggle her bosoms at Edith when possessed by a wicked ghost, as a proper woman would do no such thing.

This book was published in 1971. Perhaps the author was shocked by the sexual liberation of the 1960s and the new freedoms for women with the availability of birth control pills. Clearly, Richard Matheson wasn’t a fan of women being forthright in their pursuit of sexual pleasure.

It also felt to me that Matheson was homophobic, referring to the character of Edith as a “lesbian bitch.” One might argue that a fictional character made that comment to another fictional character in the context of a story, so maybe it isn’t a reflection of Matheson’s world views. I believe his characters didn’t need to have such a conversation at all, so his choice of words is telling.

The sexual scenes weren’t shocking or frightening to me. I found them ridiculous and foolish, the ramblings of a boring old fart. Fifty years after the publication of Hell House, the world has changed enough that what was appalling to a reader of that era is not even a little scary today. Those aspects of the story didn’t age well.

The concept of a house haunted by an evil ghost stands the test of time. When the group arrives and finds the windows of the house have been bricked over, I felt their dread. The reader is treated to the full experience of a creepy abandoned home, and I enjoyed being introduced to the house.

As soon as a ghost fondles Florence’s derriere roughly seventy pages into the book, I was pulled out of the spooky ambiance. A spectral butt grabber is rude, but Florence seems amused by it. Again, this is something that didn’t stand the test of time. A female character today would have been angered by such an action rather than thinking it clever or rambunctious.

Clearly, I was not a fan of this particular book, but I understand that I, with my modern opinions and healthy libido, was never its intended audience.