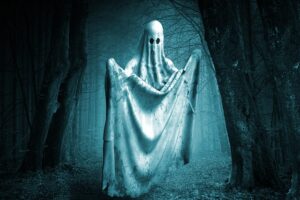 Anne, one of the children in The Others, sees ghosts…or does she? Point of view is everything in this ghostly film!

Anne tells her brother Nicholas that it is Victor that opens their bedroom curtains in the night over and over. Anne closes them, and moments later, they are closed again. Victor is to blame, Anne explains, and doesn’t Nicholas see Victor over there?

It’s not clear if Nicholas actually glimpses Victor or if poor Nicholas is just scared out of his wits by his sister’s stories. Anne claims to see ghosts throughout the film, but only at the end of the film does the audience learn that Anne is a ghost.

In fact (huge spoiler alert), Anne, Nicholas, and their mother Grace are all ghosts haunting that house. The hired help is also deceased, but continue to do yardwork even in the afterlife.
Victor is alive and the other members of his family are as well. Anne is not the girl seeing the ghost; she is the ghost seeing a living boy in the same house where she died.

Thinking back over the movie, Anne and Nicholas being ghost kids might have been hinted at in a Bible study scene. They talk about the “four Hells,” one of which is Children’s Limbo. In hindsight, perhaps they were in Children’s Limbo all along.

Having the ghosts as the main characters and experiencing things through their senses is what makes the movie special. If we’d seen it through the eyes of the living family inhabiting the house, it would have been just another haunted house tale.

Finding out that the mother smothered her children with a pillow and then shot herself, leaving them all trapped at this property, was an amazing twist. The clues and hints might have been there all along, but I didn’t guess that they were the ghosts. I was surprised, and it’s rare that a film twist catches me so off-guard.

One thought on “Point of View Is Everything in The Others”